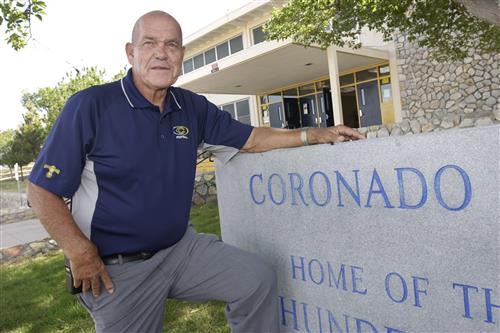 (CORONADO HIGH SCHOOL -- Oct. 8, 2020) — Dozens of Coronado T-Bird Football alumni this weekend honored the legacy of former head coach Don Brooks with the creation of a scholarship that will bear the name of the man they all revere as an influential figure in their lives.

Players from as far as Oklahoma and Arizona traveled to El Paso over the weekend to officially kick off the Coach Don Brooks Scholarship Program that will grant $1,000 to a current Coronado football player who showcases excellence on the field, in the classroom and the community.

"This is the least we can do," former High School All-America linebacker Lance Taylor told media. "He's touched so many lives and influenced so many of us, so this is one night we'll all remember for the rest of our lives."

Brooks retired in 2011 after 35 years at Coronado. During his tenure, the T-Birds won 229 games, reached the state quarterfinals and earned several district and bi-district championships.

EPISD in 2016 renamed the Coronado football stadium as Quarles-Brooks Stadium to honor the legendary coach.

If you'd like to contribute to the Don Brooks Scholarship Fund through the El Paso Community Foundation, you may do so here.