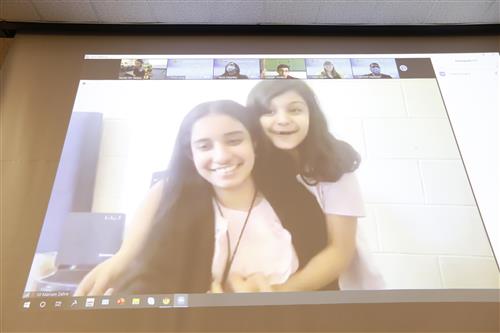 For the third year in a row, an EPISD student was crowned champion at the El Paso Regional Spelling Bee.

Marium Zahra, a seventh-grader at EPISD’s Young Women’s STEAM Research & Preparatory Academy, correctly spelled the word “realgar” on the 23rd round of the bee to get a chance to compete on television in the Scripps National Spelling Bee.

“There’s a lot of pride knowing you are representing your entire city,” Zahra said. “The last few weeks I didn’t sleep much. I studied about five hours a day to prepare. I’m so happy.”

The spelling bee is presented by the EPISD Education Foundation and sponsored by Peter Piper Pizza.

Marium, who last year also won the EPISD Spanish Spelling Bee, was confident throughout the contest, which this year was held virtually to observe health guidelines in place because of the COVID-19 pandemic.

She was joined in celebration by her sister and her teachers at Young Women’s STEAM.

Second place went to Wiggs Middle School sixth-grader Arnav Tonde and third-grade went to Claire Coble, a homeschooler from Roswell, N.M. EPISD will have an award ceremony for Marium and Arnav on Monday.

Marium will now go through the qualification process to compete in the Scripps National Spelling Bee, which this year will be held on July 8 at the ESPN Wide World of Sports Complex at Walt Disney World Resort in Orlando, Fla.

Normally, the national spelling bee is in the Washington, D.C. area, but because of the pandemic it has been moved. Another change is that not all regional winners will travel to participate. The qualification rounds will select the top 10-12 spellers in the nation, who will then be invited to compete in person in Orlando.