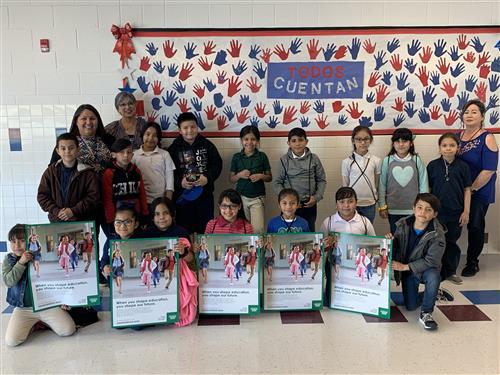 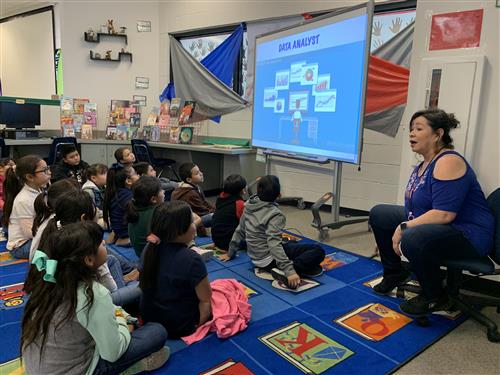 (AOY ELEMENTRY SCHOOL -- March 5, 2020) — It’s National Statistics in Schools Week and the students at Aoy are taking this opportunity to learn more about how the facts and figures from the U.S. Census help schools and communities like theirs.

Officials from the El Paso office of Census 2020 visited the Segundo Barrio school to helps students learn more about how the population of the country is counted and how those numbers impact their family.

Students kicked off the lessons by doing a singalong about the importance of having a complete count in the census before breaking off in small groups to have a hands-on activity about population shifts.

“They’re learning statistics, math, social studies and even civics using these important lessons,” said Aoy teacher Alejandra Escalera. “But they’re also learning about how important participating in the census is, and they can take that message back home to their parents.”

Aoy is a community being targeted by Census officials in order to increase participation in the count.

Census Day is April 1, and the city is expecting a celebration to kick off the counting of El Pasoans. The online version of the census will open on March 12.

EPISD is partnering with the Census Bureau and the Paso Del Norte Complete Count Committee to help spread awareness about the upcoming count. The goal is to have broad participation in the census and help secure adequate funding form the federal government to El Paso.

Census results help determine representation in local, state and federal legislative bodies, and also factor in the dissemination of billions of dollars in funding into states and communities.

Several EPISD schools are planning activities around the census, and many campuses will have mock census counts on April 1.

Story and photo by Gustavo Reveles